So we had ticker and ticker_batch channels that did not match Coinbase Pro channels. And now we have new market_trades channel that does not match with Coinbase Pro either…

So how we are supposed to get same data in Advanced Trade that we are getting from Coinbase Pro ticker channel?

I show buys in green and sells in red like it is done in coinbase ui. I made test buy and test sell. Market data showed my buy as sell, and sell I made appeared as buy!

I’m wondering, how does it not match pro? its working well for me 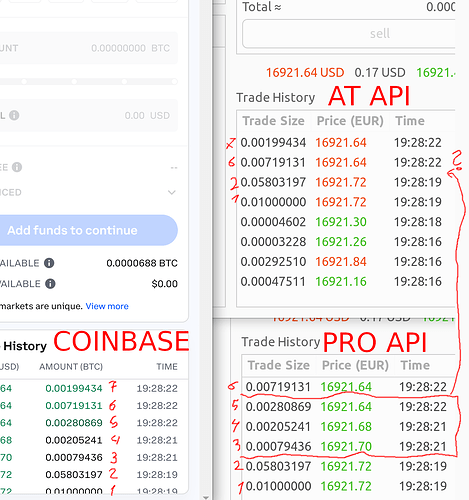 And wrong side! Both apps use green for buy orders and red for sell orders.

And best ask/bid is not available in both channels.

Also now you need to handle two channels ticker and market_trades if you also need some stats.

That must be documented / mentioned in migration guide.

Also, the time of the individual trades is not present in the documentation.

(It is present in the actual payload from the socket.)